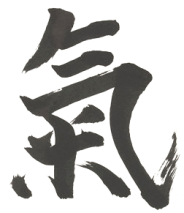 4) Put yourself in your opponent’s place

If you rely on physical strength only, you will not be able to deal with an opponent who is stronger than you. That is why much attention is given to leading the mind of the attacker. Obviously, you have to know your own mind first before leading others.

Moreover, these principles are not limited to aikido. One might as well practice ki-judo, ki-football, ki-business management, ki-cooking, or anything else that combines physical activity with the use of the mind. It is just because of historical curiosity that unification of mind and body came to be practiced through aikido techniques.

The following list comprises the most essential set of technical principles of aikido.

These are not individual techniques only, but technical principles each having numerous different versions and manifestations.

More detailed descriptions are behind these links:

The word "aikido" is comprised of three characters:

The last character, dō, refers to a way of life, and can be found in many martial arts (e.g. judō, kendō) and other arts (e.g. chadō - tea ceremony, shodō - calligraphy).

The concept of "ki" is discussed here.

The character for ai is used in verbs "to match" and "to fit", and in compound words such as e.g. "union" and "synthesis".

Documented at least since the late 19th century, aiki 合氣 is a martial concept, which referes to e.g. "breaking the enemy’s resistance without fighting" (Budo Hiketsu Aiki no Jutsu 1899: 14,  quoting Sun Tzu's Art of War, Ch. 3) or "merging with an episode or event as it exists and then redirecting it" (ibid. 8, translator's note 1).

Characters for ai and ki do not appear together outside martial arts, which has given room to many possible interpretations and translations, one popular being "harmonizing energy". This has a rather esoteric tone, even though it would not need to have. Tohei was especially keen on removing religious and mystical connotations from these terms.

If you define ki as a whole consisting of mind and body, then aiki simply refers to unification of that whole, and aikidō to the path to and for that unification, hence

"the way of mind and body unification".

"Ki-aikidō" is a shortened version of Tohei's original Shin Shin Toitsu Aikido - aikido with mind and body coordinated (Tohei 1978: 18-19). It ultimately states the same thing twice, which is unnecessary for the concept. The name underlines the importance of ki in this style of aikido, but the background is, however, historical and political - Tohei's brand needed to be distinguished from other aikido brands.